If you have ever experienced unrelenting fatigue, muscle and joint pain, difficulty concentrating, you may have Chronic Fatigue Syndrome. We discuss symptoms & remedies

What is chronic fatigue syndrome?

Chronic fatigue syndrome (CFS) is a debilitating condition that significantly impacts the lives of those who suffer from it. Also known as ME (Myalgic Encephalomyelitis), the condition is characterised by extreme fatigue, which makes even the simplest tasks impossible.

This extreme fatigue and tiredness don’t seem to go away, no matter how many hours of sleep you receive a night.

CFS was once seen as a controversial illness, but today, it is widely accepted as a medical condition. However, it is very difficult to diagnose, because there is no official test for CFS. Your doctor will rule out other causes of fatigue and ensure that there are no underlying conditions that result in extreme fatigue. 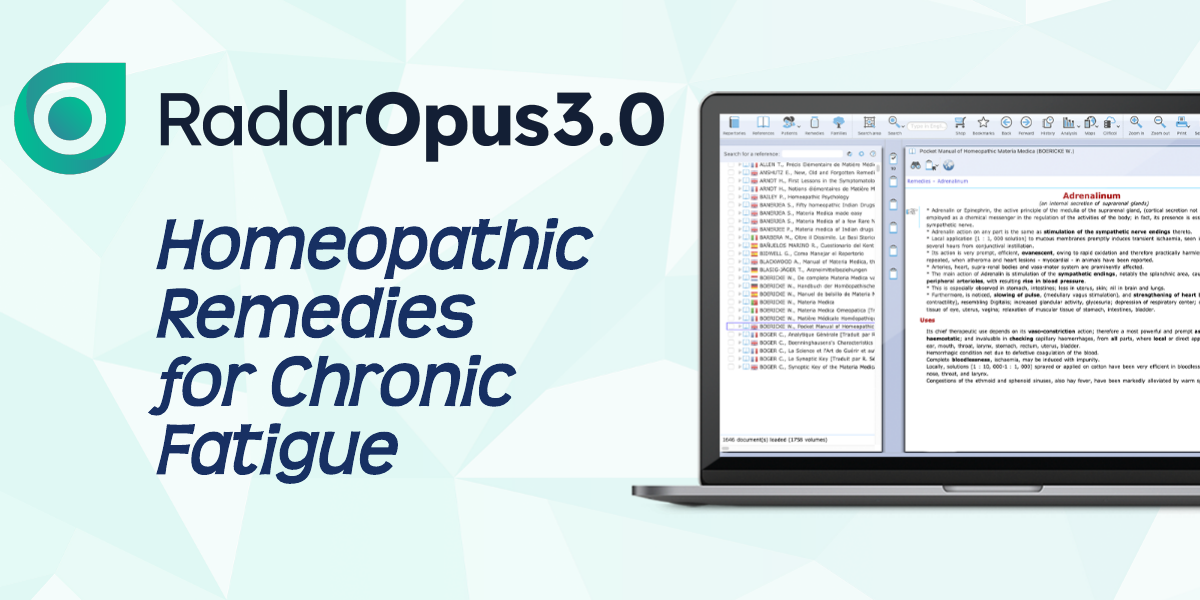 The precise causes of chronic fatigue syndrome are unknown, and it can be difficult to diagnose because other conditions can result in similar symptoms. Many individuals can be born with a predisposition for the disorder which can be triggered by a number of the following causes:

Chronic fatigue syndrome is diagnosed on the basis of extreme fatigue lasting at least 6 months, with no indications of underlying causes or explanations. This fatigue often worsens with physical activity, yet no amount of sleep can leave a person feeling well-rested.

Chronic fatigue syndrome (CFS) is a debilitating condition that can significantly reduce the quality of life for those affected. While conventional treatments options are available, many people find them unsatisfactory. Some patients may therefore be interested in exploring alternative therapies, such as homoeopathy.

Note: If you would like to use RadarOpus and practise homoeopathy, take a look at our beginner's course.

Disclaimer: Homeopathy does not work by treating named conditions; that is the domain of Allopathic Medicine. Homeopathy employs natural remedies in potentised doses to encourage your own innate healing response - supporting your overall wellbeing. For the best results in helping your condition, we advise you to visit a professional Homeopath rather than rely on anything mentioned in this article. By consulting with a Homeopath, your individual treatment plan will help you gain a better understanding of yourself and what triggers your emotional or physical disease. When you develop an illness, the way you experience your symptoms is unique to you – therefore your Homeopathic prescription will be based on your subjective symptoms and individual reactions rather than your diagnosis. That being said, there are remedies which do have an elective affinity to certain organ systems, physiological and pathological processes. These are outlined below for chronic fatigue syndrome.

The Acid group of remedies is a very important one when helping patients with chronic fatigue via the homeopathic approach. There are several important themes for individuals requiring remedies from this group – namely, and most importantly, exhaustion from overdoing it in a particular area (each acid has a domain in which they tend to over-exert themselves). It could be the overworked businessman or student (Picric acid), the self-sacrificing carer (Muriatic acid) or someone worn-out from painful long-lasting grief (Phosphoric acid).

Another important factor is the opposite state that precedes the eventual burn-out; where there used to be excessive liveliness, extroversion and industry in all their endeavours, there is now lethargy and indifference. There can be marked self-destructive tendencies over perceived failures to come up to their own impeccably high standards, as well as an inability to set limits for themselves, which only leads them into further broken-down states. Typically the state of fatigue is brought on by shocks, grief or prolonged mental exertion, such as when facing a pressurised work deadline.

Contemporary Homeopath and medical Doctor, Massimo Mangialavori (whose Suggesta repertory is available in RadarOpus) says the following about Acid remedies:

One of the compensation strategies of the Acids is to over-work, mainly for the family. You can see how much they are able to do, but how little it has to do with what they really would have liked to achieve in their life... Most Acid patients present with diseases of the digestive tract. Severe problems with their digestive system is often a representation that they cannot be properly nourished... The inability to "take in" is not just on a physical level either. It seems Acids live in this negative state because they were unable to integrate any nourishment or nurturing from their early family environment.

This remedy has gained its laurels in the treatment of chronic fatigue. It is a remedy par excellence for breakdowns following prolonged periods of study or mental exertion at work. These individuals feel much, much worse after trying to apply themselves mentally to their usual tasks or study. The body feels tired and heavy and there may be burning sensations along the spine which seem to emanate from an occipital headache. Understandably, the best relief for such patients comes from sleeping, resting or lying down. There is complete indifference and exhaustion, even reading for pleasure becomes a chore.

In this remedy the weakness is expressed more physically then in Picric acid (more mentally) – all the joints may feel bruised with drawing or tearing pains in the limbs while resting. This leads them to want to move about, which of course eventually results in even lower energy levels. The feeling in the body is like a kind of inertia coming over them - they may even slide down in bed from the weakness. Another guiding symptom for the Homeopath is the feeling of emptiness or all-gone sensation in the stomach. These individuals can come across as rather introverted, suffering in silence over their tendency to self-sacrifice to accomodate other’s wishes.

In this remedy the weakness is expressed more through the emotional level owing to the draining effects of long-lasting grief. Slowly but surely, the patient loses their vitality - becoming softer and more withdrawn, eventually leading to indifference and apathy towards loved ones. The emotions become 'frozen down' and they can end up just lying and looking at the wall to avoid contact. There can be a desire for refreshing cold drinks or fruit which can momentarily enliven the senses. It is also a useful remedy where there has been hair-loss, and in children it can be helpful in the treatment of growing pains. It is also indicated when there is debility from loss of fluids, such as after an influenza, heavy menses or even intercourse.

This is an important remedy where there is nervousness, weakness and insomnia from work worries. It is also very useful when there is exhaustion following operations. There are problems focusing the mind and forgetfulness when trying to remember names of people or things. Everything gets on top of them and they become irritable. Unlike the other remedies mentioned so far, these types tend to try and keep up their extroverted exterior and excitability despite their worn-out condition.

An important remedy to help regain strength after enduring an episode of influenza. There is usually restlessness at night with sudden waking from nightmares. The headaches can be very intense, primarily in the forehead with a feeling as though the eyeballs were being forced out. It has also been used to bring relief during teething where the child also has spasms.

It is a useful remedy for chronic exhaustion, especially when this is related to the respiratory system. The weakness is so deep-seated it feels as though it is flowing through their very veins. A strong keynote is that they are much worse when having to use the voice, so it can be a helpful remedy for laryngitis. Like many remedies for chronic fatigue, they are much worse from exertion. There is difficulty breathing, especially after only a small amount of physical exertion. The sensations are typically of emptiness and trembling which are aggravated by rest. The pains tend to come and go gradually over the course of the day.