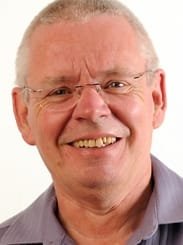 is recognised throughout the homeopathic world as a prolific author, lecturer and authority on materia medica

Each of the many books he has authored makes a contribution of major significance to our understanding of substances and materia medica. His lectures are inspiring and appreciated for their liveliness, depth of knowledge and breadth of factual information.

Born in Den Helder, Holland, Frans taught at an elementary school from 1970 to 1978. From 1976 – 1983 he pursued his homeopathic education, while beginning his own practice in 1979. At this time, he had begun to translate homeopathic books by masters such as Kent, Allen, Tyler, Vithoulkas, and many others. In 1985 he wrote Kindertypes in de Homoeopathie (Children types in Homoeopathy), based on his experiences as both a teacher and a homeopath.

In 1992 he wrote Synoptic Materia Medica I, providing a materia medica overview as well as a quick and compact reference. This was followed in 1994 by the Concordant Materia Medica, which was enlarged in 1997 to include Hering’s Guiding Symptoms. Synoptic Materia Medica II broke new ground by focusing on small remedies and the correlations between the sources of the homeopathic remedies and how they relate to the drug pictures. Furthering that theme, Prisma Materia Medica (2002) takes data from non-homoeopathic sources as both reference material for the homeopathic materia medica and as the source of potential symptoms. Frans’ two most recent books are Kingdom Monera and Viruses (2005) followed by Kingdom Fungi in 2007.

Now, after five years in the making, Frans is finishing his book on Kingdom Plants. Co-authored by his wife, Dr. Linda Johnston, the book discusses over 2000 plant remedies in 149 families following the latest classification system, APG II. Family themes are elucidated based on botanical classifications, phytochemicals, botany, traditional uses, folklore, history and many other sources, further supported by homeopathic information from provings, cases and other materia medica sources.