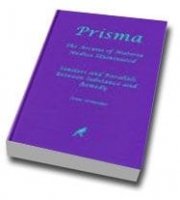 a Materia Medica which has rightly become a contemporary classic - on the bookshelves of many modern Homeopaths!

Quotes from the introduction of Prisma:

We seem to be so devoted to quantification and to explanation in terms of cause and result that we tend to overlook the significance of meaning, connection, and analogy

The 'provings' of Bufo are simply ridiculous, to put it bluntly. However, modem research and experiments with toad poison open up new perspectives. Ditto with other substances of animal, mineral, or vegetable origin. Another advantage is that prejudices can be counterbalanced by more accurate observations. This is of special interest when such prejudices are implied in the materia medica. As with the toad, the bushmaster [Lachesis muta] appears to lend itself readily for such purposes. In his Studies of Homoeopathic Remedies, Gibson points out that there are correspondences between the character and behaviour of the "dreaded surucuccu snake of South America" and the characteristics of the Lachesis 'subject'.

Following older descriptions in homoeopathic literature, the snake is depicted as "an aggressive brute, attacking even human beings without provocation". The authoritative work Snakes: The Evolution of Mystery in Nature, by biologist Harry W. Greene, however, shows that the bushmaster hardly ever bites, partly because it is unusually timid and partly because it is strictly nocturnal and doesn't come around human habitations. Of some 8,300 snakebites recorded in South America for the years 1902-1965, only 16 were by the bushmaster! According to Roger Caras, in Venomous Animals of the World, the bushmaster is slow to take offence and of a truly placid disposition. He illustrates this with a story about some people who "were dragging a large bushmaster along a dusty road on a leash they had fashioned from a shoelace. ... Periodically they would stop and push the reluctant snake along, for it was not very good about being walked like a dog."

Click on the Gallery images for a quick tour of Vermeulen's Prisma Materia Medica!