RadarOpus blog - Kent's Aphorisms - Be inspired by the Masters of Homeopathy!

Be inspired by the Masters of Homeopathy! Kent's Aphorisms and Precepts - a fascinating glimpse into the philosophy of one of Homeopathy's greatest practitioners

In this blog post, we want to pay tribute to one of the true geniuses of Homeopathy - James Tyler Kent - whose stirling work creating a truly outstanding repertory has influenced countless generations of Homeopaths.

Dr. Kent taught Materia Medica at the Homoeopathic Medical College of St. Louis, from 1881-88, at the School of Homoeopathy, Philadelphia from 1890-99, at Hahnemann Medical College and Hospital, Chicago from 1903-9, and Hering Medical College Hospital. Students from England, European countries, India and other parts of the world sought admission to the institution where he taught the subject. Sir John Weir, A.H. Grimmer, Pierre Schmidt, B.K. Bose, and other famous homoeopaths from all over the world were his disciples. He was the President and Trustee of Chicago Homoeopathic Hospital. His lectures on 'Homoeopathic Materia Medica', 'Homoeopathic Philosophy', and the 'Repertory of the Materia Media', are fundamental texts still utilized today.

Take a look at some of Kent's inspiring quotes! 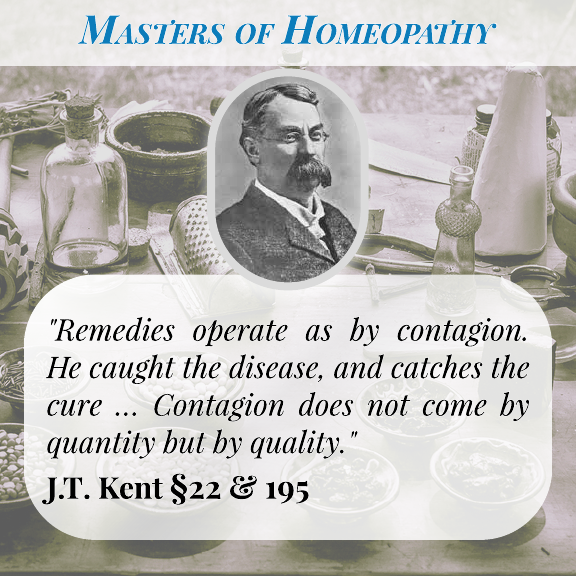 Kent's repertory is a monumental work which still forms the backbone of the two main modern repertories - Synthesis and Complete.

Kent, like many American Homeopaths at the time,  was influenced by Swedenborg - a Christian mystic - embedding the idea that suffering begins at a non-material, spiritual level. Some have questioned the religious overtones of Kent’s work, and yet his repertory has had profound effects for over a century. In Kent’s hierarchy, the innermost of man consists of the Will & the Understanding, and these are extended outward through the general physical organism.

So, what does this mean in practical terms? Kent followed Swedenborg’s principle of correspondences, which in Homeopathic terms tells us the following:

Disease processes are replicated throughout the system, e.g. a person’s mind digests a concept, and then decides which parts to keep as useful (truth) and which parts to eliminate as waste (false), in the very same manner that the digestive organs process food into that which is nutritious and that which can be excreted. In this sense, they have a correspondence with one another, and therefore a therapeutic relationship.

This gives us a useful psychosomatic hierarchy when working with the totality of symptoms - and a relational structure of the Organs in a fashion similar to that used in Chinese medicine. The doctrine of correspondences also teaches us to look for a unifying theme that ties all the seemingly disparate symptoms together into a meaningful constellation that is central to the person’s core experience.

The Will relates to asserting and doing – action! The Will relates to the conscious processes. In the body, the vascular system corresponds –  the blood. The voluntary muscles obey the Will, whereas the muscles of digestion are involuntary. The Heart is what keeps us alive with its motor-rhythm - never ceasing. The emotions too are related to movement (e-motion). We are moved by emotions whereas we stop and think to digest concepts. Loves and desires are related to the Will - we are compelled to act because of our desires and drives. The Liver is responsible for synthesising proteins and producing glycogen, giving us energy. The genitals give us creative or generative power, expressing our desires on the physical plane.

Understanding / Intellectual processes revolve around taking things in and evaluating their usefulness. When we use our understanding, we have to decide whether or not the information is true or false, good or evil. The Mind does this with concepts, the stomach and intestines do this with food - sorting out that which is nutritious and to be retained vs. that which is waste and can be excreted. The kidneys do this with liquids. The action of the Understanding is considered feminine because it is about receiving, whereas the Will is considered masculine because it relates to outward, goal-oriented action.

For Kent, it was important to be able to see which of these 2 pathways were more affected in a case. This would potentially rule out or favour certain remedies when analysing the repertorisation. It would also help to determine the likely direction of cure. E.g. if the patient is recovering from Liver disease due to homeopathic treatment, one might expect old rheumatic complaints to return according to Hering’s law.

For more info on this fascinating area, we refer you to Peter Fraser and his excellent book on Correspondences - from which the following image is heavily inspired. 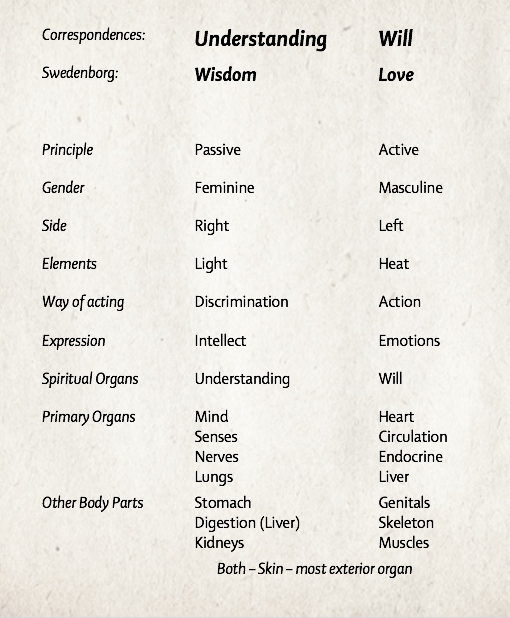 Below is a fascinating quote from Kent himself - taken from his lecture on Correspondence of organs, and direction of cure

The innermost of man consists of will, understanding, memory; and these are extended outward through the general physical organism. This idea belongs here in considering the direction of symptoms - from the innermost to the outermost. We meet patients in whom we make what we would not know would be a good prescription except for a comprehension of this relation of the innermost and the outermost. A patient returns after a prescription has been made, who, from his symptoms would think himself worse, yet he could not be so considered except by his reasoning that something has appeared which he did not have before. Then the doctor would be tempted to change the remedy if he is not familiar with correspondence of organs. By his knowledge of correspondence of organs he is able to know whether the patient is better or worse.

The physical organs correspond to internal man; to the will and understanding. The intellectual faculties consider a proposition presented, weighing it in the light of things learned to determine whether it be false or true, partly false or partly true. The memory holds it while it is examined and considered, and the intellectual faculties digest what is received, separating truth from false, and appropriating the truth and rejecting the false.

The kidneys perform similar work, separating the false from the true in the blood. The worn out part of the blood is manufactured into urea, urates and is carried off. The kidneys do for the blood what the intellectual faculties do for truth.

At first you may not perceive any relation in these things, but long observation and examination of these reveals much.

The physical generals are those things which can be predicted of the bodily condition in its entirety. First of these to be considered is the patient's relation to heat and cold. He may be very warm, desiring cool things, cool air, cool applications, cool food and light clothing; or he may want heat, cannot be too warm. He may be so cold that there is lack of vital heat. Now what has this to do with the hip-joint, the kidneys, the liver, the stomach or the uterus? Nothing, yet these things relate to the man as a unit. They are general in their application to his entire bodily condition. His desire for motion or rest is the next important physical general. Perhaps he cannot keep quiet, never comfortable unless he is walking. At the same time his shoulder may be more painful on motion of that part; working the arm from the shoulder, and all that relates to that part, may be worse from motion. The patient is better when walking, but the shoulder is worse from motion. It would be foolish to start with the part to try to see the patient himself. Many remedies have the modalities of the part differing from those of the patient. The patient comes first before his parts. Again you may have the patient himself worse from motions, and all his aches and pains worse from motion. How he is affected by the air is another physical general. He may be better or worse in the open air. If the patient is a woman, her menstruation must be considered. This is not particular - menstruation is a function of the body, and she will say that she is worse or better during menstruation, or worse just before or just after menstruation. The patient as a unit may be worse or better after eating; himself all over may be better or worse after the rectal evacuation, better after stool; these are important generals of the body. Two things run through the conditions, and must be distinguished, the bodily conditions which are aggravated from various modalities, and the particular aggravations from them.

Here Kent is speaking of ‘the generals’ as referring to the PNEI axis - Psychological, Neurological, Endocrine, Immunological - the global (general) systems which organise the parts of the body through which the vital force acts dynamically.

Kent's criticism of Boenninghausen's grand generalisation has a valid point - in the sense that the affected part can have a different modality to the whole person - and to conflate the two may cause confusion. Yet, Boenninghausen also has a point in the sense that many provings are fragmentary or just self-experiments, and thus all the symptoms are channeled through a small sample group - few constitutions / susceptibilities to bring forth the proving symptoms. It makes sense, but it is also a hypothesis. Other homeopaths see remedies as having very specific affinities - like Carduus marianus to the liver.

Among the conditions relating to the bodily condition are weakness, pallor, and, frequently, the color of discharges when the color is due to a condition which represents the loves. As the blood is, so is the love. The color of the discharge expresses the condition of the blood when there is a deterioration which renders them greenish. The greenish color to discharges from the vagina, as in cancer, represents the condition of the blood. A laudable condition of the discharge is common. When a symptom is common to all or to many remedies it is not important. Hahnemann's emphasis is upon the symptoms strange, rare, and peculiar. These are most important. The common symptoms in each group are left until the last in the symptoms of the affections, of the intellect, of the memory and of the physical generals. These are all generals. We go first to the generals and then to the particulars, proceeding from center to circumference. You may have a long list of symptoms that would baffle a strong mentality in a man, without an idea of order. In a case without symptoms of the affections, no intellectual symptoms, no physical generals, with only a long list of particulars, what can you do? When a patient is properly examined and all is reduced to writing, then, as Hahnemann says, the greater part of the work is accomplished. When a case is properly taken, with all these symptoms brought out, it is easy to work it out to a small list of remedies. It is not a short cut - there is no such thing as a short cut. It is the proper way, working from center to circumference of the man himself.

Kent - the Art and Science of Homeopathy

The artistic prescriber sees much in the proving that cannot be retained in the Repertory, where everything must be sacrificed for the alphabetical system. The artistic prescriber must study Materia Medica long and earnestly to enable him to fix in his mind sick images, which, when needed, will infill the sick personalities of human beings. These are too numerous and too various to be named or classified. I have often known the intuitive prescriber to attempt to explain a so-called marvellous cure by saying : "I cannot quite say how I came to give that remedy but it resembled him.” We have heard this, and felt it, and seen it, but who can attempt to explain it? It is something that belong not to the neophyte, but comes gradually to the experienced artistic prescriber. It is only the growth of art in the artistic mind : what is noticed in all artists. It belongs to all healing artists, but if carried too far it becomes a fatal mistake, and must therefore be corrected by Repertory work done in even the most mechanical manner.