Your everyday companion
Always with you when you need it
Whenever & wherever
The most reliable and largest Homeopathic Repertory is now available as an App!

The Synthesis App is based on the Synthesis Repertory edition 2009, published by Dr. Frederik Schroyens.
Synthesis is used worldwide and is known to be the most comprehensive & most reliable repertory.

Containing the Synthesis edition 2009V, over 2500 pages, a full remedy list, and much more, the Synthesis Homeopathic App is the biggest and best homeopathic repertory app available for download by practitioners and students.

Features exclusively available with version 2.1 of the Synthesis App:

* All Premium Features are bundled in a single in-App purchase and can be tried free of charge up to 40 times.
To access all the PREMIUM features, go to "My Profile" and use the "purchase" button.

Features exclusively available with version 2.0 or greater of the Synthesis App:

Features available with all versions of the Synthesis App:

** English and German versions only

Although the Synthesis App can be used as a completely independent App, you also have the possibility to use it as a companion to RadarOpus!
You can send the clipboard via email to your RadarOpus program to continue the analysis, compare remedies, check the VES (Vithoulkas Expert System) results and save to your patient file.
This functionality makes the Synthesis App a true companion to RadarOpus!

Synthesis is renown as the repertory with the most reliable source referencing.
The Synthesis App does contain that same source referencing, be it in a concise format to save space on the screen.
The Synthesis App is slightly different compared to the RadarOpus software.
It does contain all remedies entries (all additions) and all rubrics, including some veterinary rubrics *, however it only contains one author reference per remedy.
If a remedy was present in Kent's repertory you see a "k".
If not, then the most original available reference is mentioned, starting from Hahnemann: "h".

In fact, in the Synthesis App you can distinguish three categories of authors: 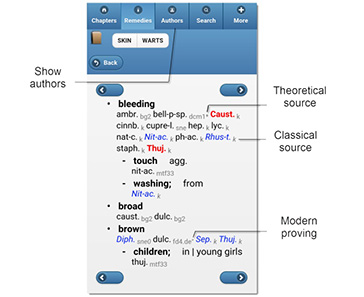 This is not a scientific division, but rather a pragmatic one for the Synthesis App.
To see more precise reference information regarding all additions in the repertory, we refer to the RadarOpus software. There you will be able to view all source references (the App only shows one author reference per addition). RadarOpus software allows the user full control over which sources are shown in the repertory at any given time (Repertory Views).

* English and German versions only

Below, you will find screenshot examples of the Synthesis Homeopathic App.

What does the Synthesis App contain?

* only in the English and German versions

Can I use the Synthesis App on more than one device?

Synthesis App Demo (Lite) version
You can install and evaluate the demo (lite) version on as many devices as you like.

Synthesis App Full Version
The license agreement permits the user to install the App on two personal devices on the same platform, for example an iPad and an iPhone.

If you wish to use the app on a new device, you will need to uninstall the App from one of the other devices.
After the App has been uninstalled, contact support and mention which device you are no longer using. Support will deactivate this device and you will be able to install the App on your new device.

If however you also have a mobile device with a different platform (for example a Windows 8 Phone from the Windows store), then you will need to purchase the Synthesis App again for that platform type.

On which mobile devices does the Synthesis App work?

As the best homeopathy app for iPhone, Android and more, the Synthesis App has been developed for all mobile platforms and will run on most devices if the minimal technical requirements are met.

What are the minimum requirements for the Synthesis App?

Only if you want to use the Synthesis App as a companion to RadarOpus and send the Clipboard with or without Analysis to your Email will you need an Internet connection via Wi-Fi or phone network. ×

Can I test the Synthesis App before I decide to buy it?

In what languages is the Synthesis App available?

The Synthesis App is available in the following languages:

* Does not include the veterinary rubrics and additions ×

Although the App can be downloaded by anybody, it is an application specifically created for homeopathic practitioners or students. Hence, it is not suitable for the general public.

Where can I download the demo (Lite) or full version?

Both the demo (Lite) and full versions can only be downloaded from the Android/Apple/Windows App Stores.
You can find the direct download links in the View, try & buy section.

I am a veterinary homeopath, is this App for me?

Yes, you can use this app in the same way as you would use the Synthesis repertory book.
You also have the benefit of additional veterinary * rubrics, and what is more - it is always at hand wherever you are!

* English and German versions only

Zeus Soft has only chosen a price category in one currency and one country.
The App stores then use a table (pricing matrix) defining the price for other countries and other currencies. Neither Zeus Soft nor its dealers have control on the prices of the Synthesis App in different countries.
Therefore the Synthesis Homeopathic App prices vary from one country to another and from one currency to another if converted according to bank exchange rates.

Is there a cheaper version for developing countries?

Zeus Soft can only decide one price category for the App worldwide. The App stores then decide about the price in all countries, using their price matrix (see previous FAQ). This is the policy they apply for all products and the reason why an iPhone is not much cheaper in India than in the USA. Zeus Soft has to comply with that policy.

How much is the Synthesis App?

What do I do if I have a payment issue with my Synthesis App?

Here you find the most recent version of the Synthesis App Manuals.
For any questions not answered, contact your local representative or support.